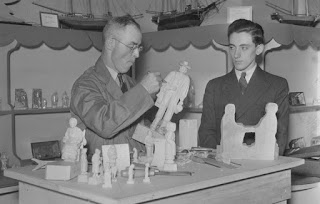 
England is a land rich in cultural history, so it is no surprise that there are fantastic artists found throughout England’s historical timeline.

England has produced, and continues to produce, some fantastic wood sculptors. Many of these English sculptors create original works. They also work hard to restore famous buildings, statues, and ornate works of England’s past.


Ian G. Brennan, who works in Southern England, is one of the most important English sculptors living today. He is world renowned for his ability to sculpt wood and his bronze casting.

His realistic wood carvings are highly sought after. He has created works for British and European Royalty, as well as for countless Nobility, Heads of State, and British Prime Ministers. His realistic sculptures can be seen in Windsor Castle, Westminster Abbey, and St Paul’s Cathedral. Brennan creates sculptures of various subject matters including crests, unicorns, griffins, and wildlife.


Charles Oldham is another contemporary English Sculptor. In 1990, Oldham was nominated into the Master Carver’s Association. Charles Oldham helped with the efforts to restore areas of Windsor Castle, Hampton Court Palace and the Spenser House. One of his most well known works was created for the National Trust. This work was a life sized sculpture of a carriage pulled by a pony. It can be seen at the museum at Arlington Court in Devon.


Henry Moore is well known for his devotion to postwar humanism following World War II, and for his desire to create large-scale public sculptures. However, Moore was also active in the modernist movement, and surrealist movement. His most recognized wooden sculpture is entitled “The Leaning Man.”

Moore was recognized as one of Great Britain’s best sculptors during the 1920s. During his lifetime he was allowed to present his own exhibition at the Museum of Modern Art, and was awarded the International Prize at the Venice Biennale. Moore worked extensively with the British Council to place large-scale sculptures across the nation and West.


Grinling Gibbons served as the Master Carver of Charles the II during the 17th century. While Gibbons was relatively unknown before his accidental discovery, Charles the II quickly became a big fan of his work. Gibbons' carving “The Crucifix of Tintoret,” was his first sculpted piece to appear at the royal court. Charles the II was enthralled with Gibbons’ work; however, the queen was not completely overtaken with Gibbons' ability. Even so, Gibbons was employed by King Charles II in 1671.

During Grinling Gibbons’ lifespan he was also employed by Charles Wren. He produced several works for St. Paul’s Cathedral and several other London area churches. Gibbons is well known for his carving of choir stalls, the bishop’s throne, mirrors and furniture.


Do you know of an English sculptor I missed?