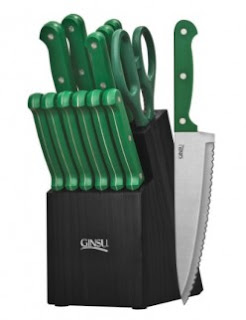 The first ever commercial for Ginsu kitchen cutlery set knives aired in 1978. I remember my dad shaking his head and saying there had to be a trick to it.

As a knife collector and sharpener, in addition to his carpentry skills, Dad just didn't believe the blades would hold an edge well enough to cut a tomato after being used to hack at a tree limb.

However, over the intervening years, the Ginzu reputation for quality has continued to grow.

These days, the old familiar black handled knives are still available, but Ginsu also has nice selection of cutlery that have handles to match almost any kitchen decor.

Personally, I like the red handled knives, but my daughter would probably prefer the purple or green color knife handles.

The Ginsu Shoku Set pictured here comes with a black block, but if you don't have counter top space, you can also order a wall mountable stainless steel magnetic strip, so that the knives are on the wall above the counter. The strips also come in different colors, as well as in different types of wood.

First aired in 1978, this commercial definitely got some conversations going. Most people just did not believe they commercials were true. Over time, though, many of the same people have been converted to be Ginsu believers.

Click edit above to add content to this empty capsule.
The ad below aired in 1980. Too bad the price of these knives has increased along with everything else in our current economy.

This video demonstrates proper knife skills, so important to getting the work done, but also important for safety.

For more information, click below:
Ginsu Reputation for Quality

Over the years, the Ginsu reputation for quality has continued to grow.

Do you remember the original Ginsu commercials? Do you have Ginsu knives in your kitchen? Which Ginsu cutlery set would you like to have?
Posted by Linda Sue at 8:00 AM
Email ThisBlogThis!Share to TwitterShare to FacebookShare to Pinterest
Labels: genuine ginsu, ginsu cutlery, ginsu knife sets, ginsu knives, Ginsu Shoku, kitchen cutlery, kitchen cutlery set, quality kitchen knives