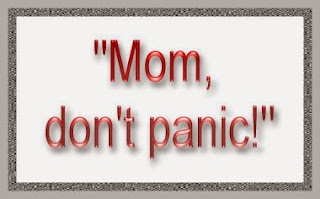 Three phrases no mother wants to hear when picking up the phone are:
Especially when followed by a dramatic pause. As a mom, you immediately imagine the worst. One of your children/grandchildren died, was in a terrible body-mangling accident, or is missing. Usually, experience tells you it isn't that bad, but it could be, which is why the worst comes to mind.

Recently, my daughter called with the first of those sentences. My son had had a single car accident due to the road conditions caused by a recent, unseasonal snow storm. He had a bump on the head, his car was pretty much totaled, but overall he was ok. It could have been much worse, which is what I immediately thought when hearing those words.

Of course, I was worried until I knew for sure they were all safe and warm, but not panicked. After all, I'm a mom. I have had children for a good many years. Not panicking, at least until after an emergency passes, is a mom thing to do.

Knowing both my children were in the blizzard, him sitting on the side of the road maybe hurt, and her and her husband driving to find him and make sure he didn't freeze to death, was nerve-wracking, since I was not able to go help due to the same storm keeping me trapped at home. At the same time, I raised them, and knew that they are competent adults and able to take care of most situations.

So, what could she have said to make it easier and keep my imagination at bay? I don't really know. I can't think of a way to easily and calmly say "Your son has been in an accident, and we don't know how bad, or even if, he is hurt." I will continue to dread those calls, but at the same time, would rather know what is going on than be blissfully unaware.

Even though I was terribly concerned about all of them, and dismayed that I could not get out to help find my son, I was proud to know that my children care about each other. Enough to risk their own lives for each other. I have no doubt that my son would do the same for my daughter, were the situation reversed. This is comforting to a mom, knowing that eventually, when she isn't there anymore, they will have each other to depend on.
Posted by Linda Sue at 11:04 AM
Email ThisBlogThis!Share to TwitterShare to FacebookShare to Pinterest
Labels: phone calls a mother dreads, phrases no mother wants to hear