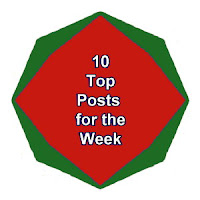 This week, the top 10 posts cover a wide range of topics from homeschool, to sewing, to computer software, kitchen tools, recipes, and toys.

Without further ado, here is the list for the week ending 12-26-2015. The articles are in order of popularity.


Top 10 Posts in Order of Popularity

Our Christmas was great. We missed seeing family and friends who are far away, but we did call them all and talk for a while.

Rather than go the traditional Christmas meal and spend hours in the kitchen, we opted to go for homemade pizza, and my son decided to bake up some banana pies. The banana pie was similar in texture to a pumpkin pie. It was sweet, but not too sweet. Everyone loved them. I will be sharing the recipe for the pie some time next week.

My youngest grandson had a new Monopoly Board Game

and all seven of us played for hours and hours. He was one of the last four players at the end of the game.Spending time with family is one of the best parts of holidays this time of year.