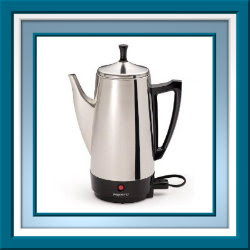 Nothing greets the morning sun like a fresh perked cup of Coffee, and for my taste, nothing brews that cup of coffee like an old fashioned percolator

I remember the years so long ago when I spent the night with my grandparents. Grandma's percolator wasn't an electric one, it was one that just sat on the stovetop (you can still get those by the way), where she brewed the coffee to the strength she and Grandpa wanted.

Actually, if my memory serves me right, she poured herself a cup, then continued to brew that coffee until it got to the strength Grandpa wanted, which he described as strong enough to float a horseshoe, or thick enough one could stand a knife up in the middle of it. Now I don't like my coffee as strong as he did, but I still favor a good perked cup of coffee over a drip maker any day. That's probably not too uncommon among avid coffee drinkers, though.

Perked coffee is as close as it comes to what we use to call river coffee. We didn't call it river coffee because we made it on a campfire at the bank of a river. We had a number five (half gallon), can with a nail hole on each six at the top and a piece of bailing wire for a handle. We dumped water and coffee in the can together, placed it on the campfire, and a little while later used a pair of pliers and a big old potholder to hold the can while we poured the coffee into tin cups which had handles on them. Wow, what a cup of coffee that was!

For some reason, demand I suppose, a lot of department stores have either reduced their stock of percolators or quit selling them entirely. I vote for a resurgence of percolators. Don't get me wrong, it isn't impossible or necessarily a week long snipe hunt to search down a percolator. If one is willing to wait a few days, there are plenty of percolators available at different websites, too. Similar to the old song, there's little ones and big ones, and tall ones and squatty ones; they're all made out of different stuff, but they all perk just the same. Seriously, from four cups to thirty, there are many sizes for home percolators, and many different styles, one of which will fit with any décor.

Momma had one of those 30 cup percolators

she often used when we had a large family get together. She might have to make one additional pot sometime during the day, but that beat having to make 8 or 9 pots in one of those drip coffee makers, the manufacturers of which, by the way, must consider a tablespoon a cup of coffee, because when I brew what the water mark calls twelve cups, by the time I pour my second cup, the pot is over half empty.

Glass, plastic, and metal Percolators are all available. They come in sizes from 4 cup all the way up to the over 100 cup stainless steel commercial pots. There is a percolator to fit any occasion.

Don't get me wrong, I am not totally stuck in those wonderful days of yesteryear. Why just this morning, when my second cup of coffee got cold before I finished it, I looked to see if they have some kind of USB powered beverage warmers

to keep my cup sitting on and which would keep the brew good and hot to the last drop, and I found they have those too. They even have some with that are also a USB hub! Like a friend of mine told me here sometime back, ain't technology wonderful? Well, it is as long as I can keep finding a good old fashioned percolator!