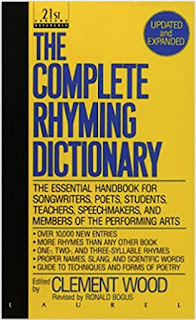 I suppose someone might call me old fashioned or maybe a bit narrow-minded when it comes to writing poetry. I got the idea long ago that if a verse doesn’t rhyme it is not a poem.

I do not by any means intend to belittle those who write by meter or whatever the method is to construct a non-rhyming piece of poetry; it is a personal thing with me, you see.

Maybe it has to do with my age of 70 years, that I’m such a stickler on the subject. I can’t remember in my early days reading a poem unless it followed a rhyme pattern.

I even wrote the poem right below arguing if it does not rhyme it is not a poem.

It’s Not A Poem

Words which sounds so much alike folks say, hey it rhymes

Without a revelation is it oil or gold just which

A lonely line all by itself without a rhyming word

How to Find Rhyming Words

Now one may be asking, how much time does a fellow like me have to spend finding words which rhyme? It once took a long time, now it takes none at all because I no longer come up with the rhymes out of my head, but out of a book. What book? The Complete Rhyming Dictionary, edited by Clement Wood.

Not only is this book the best known and highest regarded compilation of rhymes, it covers the techniques of versification divisions of poetry and hose of other subjects dealing with the poetry writing process.

Well, I still write poetry, but more decades ago than I will not admit to at the present, I added songwriting to my writing activity. I have some poems which I also turned into songs. Currently, I have written over 4,300 songs. When one writes that many compilations a dictionary of rhymes is an indispensable help.

The Complete Rhyming Dictionary was first published in 1936 by Doubleday. Because it became so popular and remains so presently, and since it is probably the most comprehensive book of its kind, it has been republished several times and is well deserving to be so treated.

Do you write poetry or songs? If so, Clement Wood's The Complete Rhyming Dictionary might be just what you need.